Tokyo on Foot: Travels in the City's Most Colorful Neighborhoods (Paperback) 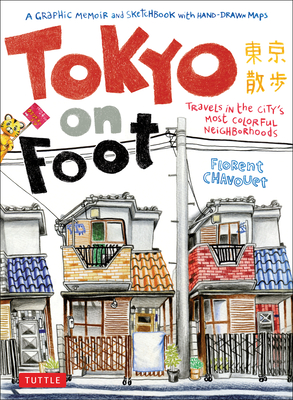 Tokyo on Foot: Travels in the City's Most Colorful Neighborhoods (Paperback)


Not On Our Shelves—Ships in 1-5 Days
This prize-winning book is both an illustrated tour of a Tokyo rarely seen in Japan travel guides and an artist's warm, funny, visually rich, and always entertaining graphic memoir. Florent Chavouet, a young graphic artist, spent six months exploring Tokyo while his girlfriend interned at a company there. Each day he would set forth with a pouch full of color pencils and a sketchpad, and visit different neighborhoods. This stunning book records the city that he got to know during his adventures. It isn't the Tokyo of packaged tours and glossy guidebooks, but a grittier, vibrant place, full of ordinary people going about their daily lives and the scenes and activities that unfold on the streets of a bustling metropolis. Here you find businessmen and businesswomen, hipsters, students, grandmothers, shopkeepers, police officers, and other urban types and tribes in all manner of dress and hairstyles. A temple nestles among skyscrapers; the corner grocery anchors a diverse assortment of dwellings, cafes, and shops--often tangled in electric lines. The artist mixes styles and tags his pictures with wry comments and observations. Realistically rendered advertisements or posters of pop stars contrast with cartoon sketches of iconic objects or droll vignettes, like a housewife walking her pet pig, a Godzilla statue in a local park, and an urban fishing pond that charges 400 yen per half hour. This very personal guide to Tokyo is organized by neighborhood with hand-drawn maps that provide an overview of each neighborhood, but what defines them is what caught the artist's eye and attracted his formidable drawing talent. Florent Chavouet begins his introduction by observing that, "Tokyo is said to be the most beautiful of ugly cities." With wit, a playful sense of humor, and the multicolor pencils of his kit, he sets aside the question of urban ugliness or beauty and captures the Japanese essence of a great city in this genuinely vital portrait.
Florent Chavouet is a young graphic artist and author living in Paris. When he returned from Japan, he realized that all the observing and sketching he had done in Tokyo led to his evolution as an artist. This is his first book. florentchavouet.com

"Besides the awesomeness of the maps, most of the book is full of odd findings and experiences that the author found himself in. I find the book to be pure genius and I am very happy that I picked it up without a second thought. It's all the little additions in the book that make it most worthwhile and I think it makes a great addition to any collection of books."Yonasu.com

"This is a wonderful gem of a book. It's a quirky, graphic 'guidebook' filled with beautifully rendered and detailed doodlings that capture vignettes of the city seen through the eyes of a resident, rather than a tourist."—SimplyFabulicious.com

"[Tokyo on Foot] will make readers with wanderlust wish to drop their everyday responsibilities and trek through a foreign city. It will appeal to the armchair traveler who yearns for a bit of the exotic, the wanderer who wants to someday visit the Land of the Rising Sun, and, indeed, anyone who appreciates the marriage of grit and beauty, self-deprecating wit, and losing oneself in good pictures for a while."—ForeWord Reviews

"From what Chavouet saw, did, ate—bugs, festivals, storefronts, a fake French mansion, random drinks and snacks—his illustrations catch perfect little details you'll never find in any guide book. His myriad of people caught in the midst of their everyday lives are undoubtedly the book's highlight. [...] By the time he's back in his native France, he's got an award-winning, fascinating book that surely makes for ideal reading for both armchair tourists and peripatetic travelers alike."—BookDragon.si.edu