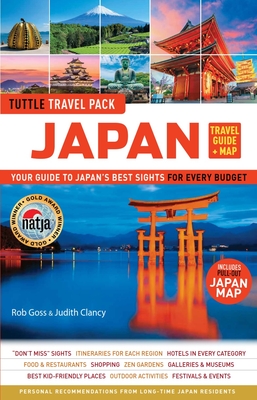 
Not On Our Shelves—Ships in 1-5 Days
The only resource you need for travel to Japan This award-winning guide puts the whole country in the palm of your hand. With a large pull-out map and tips on all the best sights, travelers can be sure they are seeing the best of Japan without wasting any time Explore energetic, ever-changing Tokyo--or immerse yourself in the country's rich cultural past in ancient Kyoto. Take to Asia's best ski slopes in Hokkaido or sun yourself on the beach in subtropical Okinawa. Experience life as a monk on holy Mount Koya or soak in a steaming onsen hot spring in Kyushu. Do all this and more with Japan Travel Guide & Map. Easy to use, and with recommendations to suit every possible taste and budget, this book leads you straight to the very best that Japan has to offer, with no wasted effort. Experienced travel authors Rob Goss and Judith Clancy provide handy lists of "Don't Miss" sights and a series of capsule itineraries that enable you to see the sights in a limited amount of time. The new edition is fully updated with a new chapter on Kanazawa and the Japan Alps. With everything included in one neat pack, it's the only Japan travel guide you need to have a great trip.
Rob Goss first came to Japan in 1999 to teach English for a year. Two years at the most was the plan. Like so many other former English teachers, however, Rob has ended up staying far longer in Tokyo without really knowing why. Cupid's arrow certainly played a part, as did the pitter-patter of part-Japanese, part-British baby feet that followed. Living in a metropolis that never ceases to amaze has helped too. Then there's having a job he loves--writing about Japan for magazines such as Time and National Geographic Traveler and, at latest count, some 70 other magazines, book publishers and newspapers around the globe. Judith Clancy served in the Peace Corps in Korea from 1967 to 1969 bringing her to this part of the world. Fulfilling a childhood dream, she came to live in Kyoto in 1970. The culture captivated her from the start and became an affair of the heart as she learned the language, Ikebana, and the tea ceremony. During that time, she taught at several universities, and worked in a major Japanese company. She is the author of Exploring Kyoto: On Foot in the Ancient Capital, Kyoto: City of Zen, Kyoto Machiya Restaurant Guide, Kyoto Gardens, and The Alluring World of Geiko and Maiko.