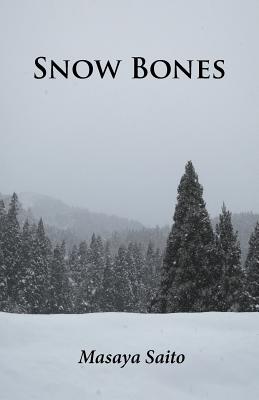 In Snow Bones "Masaya Saito...has crafted a masterpiece which illuminates further possibilities for haiku in English, crosses and perhaps eliminates the threshold separating the genres of "haiku" and "modern poetry" as such. Always, I felt as though I were reading what has been left, those evaporating bones of lived experience, which Saito invites me to recreate in flesh." - Richard Gilbert, Kyoto Journal

Snow Bones consists of four narrative haiku sequences spoken by seven different voices. The first sequence begins in winter in the north of Japan and is concerned with the death and funeral of the speaker's mother; in the fourth sequence, this narrator once again goes north in winter to attend his father's funeral. The two central sequences, one set in a metropolis and one in the countryside, pass through spring and summer to autumn; each sequence is narrated by three different speakers as they move through environments which they share without ever encountering each other except at a distance.

Masaya Saito says: "Each of the narrators in Snow Bones lives through his or her daily life experiencing the transience of its moments. Their inner worlds leak through their monologues - and yet we never really know who they are. Each one of us seems - mysteriously - to be an individual entity, and we, like the seven narrators, move around not knowing the answer to this mystery - or perhaps not even perceiving it as one - a mystery whose beauty and ambiguity I wanted to present through the accumulation of numerous tiny concrete images."

"Those who know his work have been waiting patiently for more from Masaya Saito, and now, some thirty-four years after his slender and beautiful volume Ash, we are finally rewarded. Snow Bones is an altogether more ambitious work, with an intricate structure and a broader palette, but reveals the same intensity and attention to detail we would expect from this poet. The wait has been worth it." -- Jim Kacian