Pluralistic Rationalism and Its Impact on Contemporary Truth Theories (Paperback) 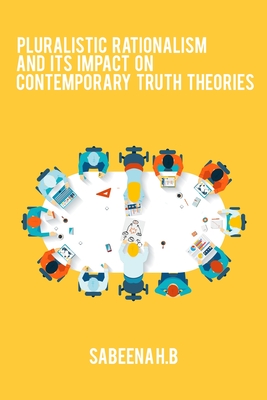 Pluralistic Rationalism and Its Impact on Contemporary Truth Theories (Paperback)

EMERGENCE OF PLURALISTIC LOGICISM Introduction Greek mathematics in essence can be evaluated as more sophisticated than the Mathematics that had been developed by other ancient cultures belonging to other civilizations. To begin with the early Greek thought, the Pre conceptual Greek mathematics used the method of inductive reason that is repeated observation, popularly known as the rule of thumb. The rule of thumb is a rule or principle, which is not based on exact calculation, but is based on experience. Greek thinking, as we know began venerating mathematics, the exact science, and a fine combination of Logic, Arithmetic and Geometry. Conceiving Logic and Mathematics as a single science, they used logic to derive conclusions from definitions and axioms, and used mathematical rigor to prove them. The area of study known as the history of mathematics is primarily an investigation into the origin of discoveries in Mathematics and to a lesser extent, an investigation into mathematical methods. The available history of mathematics record that there were a number of schools in Mathematics in Greek tradition that preceded Socrates. Ionic or Miletus schools were the first philosophical schools in the history of Greek philosophy before Socrates. Thales (early 6th century BC), Anaximander and Anaximenes were the most important thinkers of this school. Greek mathematics of the Pre - Socratic age is thought to have begun with Thales of Miletus, who has been inspired by Egyptian and Babylonian mathematics. Thales who belonged to the Milesian school, used geometry to solve problems like measuring the distance of ships from the shore and calculating the height of pyramids. While at most care has been taken to explain the principles that govern the nature dealt in physical science, equal attention was paid to the concerns of Mathematics as well. In the history of mathematics, Thales' has used geometry to resolve physical problems; in fact he is credited with the first use of deductive reasoning as applied in Geometry. Hailed as the first true mathematician, several mathematical discoveries have been attributed to Thales (Boyer 1991: p.43). In fact, he founded the geometry of lines, and has been given credit for introducing abstract Geometry. During Thales' time, Miletus was an important Greek metropolis in Asia Minor, known for scholarship. Several schools were founded in Miletus, attracting scientists, philosophers, architects and geographers. It is possible that Thales would have been given credit for discoveries that were not really his. Nevertheless it remains as a historical fact that he is known for his theoretical as well as practical understanding of Geometry. Some believe that he had even written a book on navigation, but scholars could not trace it so far,