Juanita: The Girl Who Counted the Stars (Hardcover) 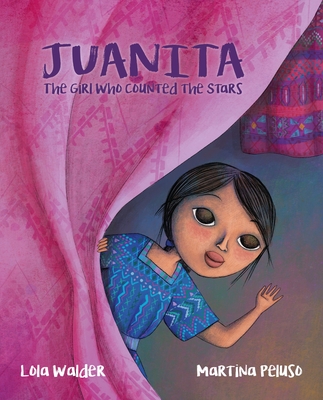 Juanita: The Girl Who Counted the Stars (Hardcover)

A magical story of a Guatemalan girl named Juanita, who loved cooking crunchy maize tortillas and counting stars every night.

Juanita lived in Santa Catarina Palop , a pretty little village next to a beautiful lake, surrounded by three huge volcanoes. She loved her pueblo and their people. Women there helped their families by weaving huipiles from silk, wool, and cotton thread while men worked the land. Juanita wanted to be of help, so she always cooked for her family her favorite meal, tortillas. At night, when the sun cleared the way for the moon to shine bright, Juanita would run onto the roof of the house for her nighttime routine: counting stars. The sky was so clear she could almost touch it.

But one day, Juanita's mom became very ill, and she couldn't work at her loom. Juanita wanted to help but didn't know how to. It appears the sky had been listening to her all the time and had a big surprise stored for her...

Lola Walder was born and raised in Seville, but Madrid is where she belongs. She studied Cinematographic Script from ECAM, and a Master in Creative Writing (Escuela de Letras de Madrid), and felt driven by a curious and restless spirit which gradually forged her two true passions: Literature and Cinema. In the last ten years she has collaborated in several media: radio, television, and press. She currently works as a film contributor for Vanity Fair magazine and is immersed in the creation of her second novel.Martina Peluso is an Italian award-winning illustrator born in Naples in 1980, where she currently lives and works. She has studied printing art at the Institute of Art in Naples and she has frequented courses of illustration at Sarmede and Pavia. Her picture book T-shirts aren't Napkins (Cuento de Luz, 2019) received Honorable mention in the 2019 International Latino Book Awards.