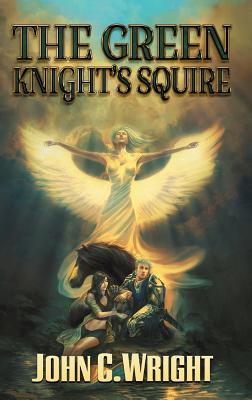 This is book number 1 in the Moth & Cobweb series.

Gilberic Parzival Moth is a strange and lonely boy who has grown up without a father, raised by a single mother who moves from town to town in fear of something she will not name. His only friends are animals, with whom he has always been able to speak. But when he awakens one night at the Thirteenth Hour, and sees for the first time the cruel reality of the secret rule of Elf over Man, he begins to learn about his true heritage, the heritage of Twilight.

And when his mother finally tells him the terrible truth of her past, he must choose whether to continue running with her in fear, or learning how to fight against ancient powers that are ageless, soulless, and ultimately damned. THE GREEN KNIGHT'S SQUIRE, the first volume of MOTH & COBWEB, is an astonishing new series about magical worlds of Day, Night, and Twilight by John C. Wright. THE GREEN KNIGH'S SQUIRE consists of three books:

Book Two: Feast of the Elfs

John C. Wright is one of the living grandmasters of science fiction and the author of THE GOLDEN AGE, AWAKE IN THE NIGHT LAND, and IRON CHAMBER OF MEMORY, to name just three of his exceptional books. He has been nominated for the Nebula Award, for the Hugo Award, and his novel SOMEWHITHER won the 2016 Dragon Award for Best Science Fiction Novel at Dragoncon.