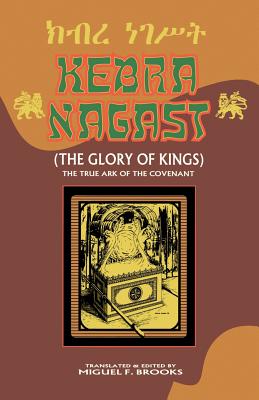 
Not On Our Shelves—Ships in 1-5 Days
KEBRA NAGAST Lost for centuries, the KEBRA NAGAST (The Glory of Kings) is a truly majestic unveiling of ancient secrets. These pages were excised by royal decree from the authorized 1611 King James version of the Bible. Originally recorded in the ancient Ethiopian language (Ge'ez) by anonymous scribes, The Red Sea Press, Inc. and Kingston Publishers now bring you a complete, accurate modern English translation of this long suppressed account. Here is the most starting and fascinating revelation of hidden truths; not only revealing the present location of the Ark of the Covenant, but also explaining fully many of the puzzling questions on Biblical topics which have remained unanswered up to today. " O]nly in the Kebra Nagast, and not in the Bible the bold assertion is made that the Ark had gone from Jerusalem to Ethiopia". " H]ow could the most important Biblical object in the world end up in the heart of Africa? The Kebra Nagast with a great deal of weight and historical authenticity offers a clear answer to this question as Ethiopia's claim to be the last resting place of the lost Ark remains unchallenged " " T]he Kebra Nagast's audacious claim of a massive cover-up and] all information about the tragic loss of the Ark during Solomon's reign had been suppressed, which is why no mention is made of it in the Scriptures". " a great epic a remarkable document erected above a solid foundation of historical truth". About the Author Dr. Miguel F. Brooks is an Historical and Biblical Researcher, Lecturer and Public Speaker, and an activist in the African Holocaust Reparation Movement. Born in Panama? of Jamaican parents, he is a graduate of the Instituto Istmen?o in Panama? and Universidad de Carabobo in Venezuela. A member of several academic and philosophic societies, he holds a B.Sc. degree in General Science and a Ph.D. in Psychology. Dr. Brooks was awarded the Centenary Gold Medal of the Battle of Adwa by the Ethiopian Crown Council for his work on behalf of Ethiopian Culture and History. He is the translator/editor of "KEBRA NAGAST" (The Glory of Kings) the Sacred Book of Ethiopia.