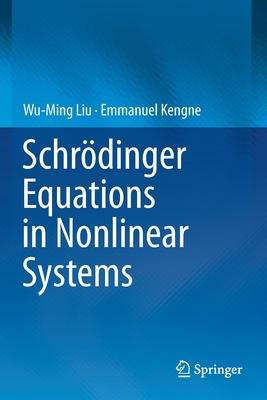 This book explores the diverse types of Schr dinger equations that appear in nonlinear systems in general, with a specific focus on nonlinear transmission networks and Bose-Einstein Condensates. In the context of nonlinear transmission networks, it employs various methods to rigorously model the phenomena of modulated matter-wave propagation in the network, leading to nonlinear Schr dinger (NLS) equations. Modeling these phenomena is largely based on the reductive perturbation method, and the derived NLS equations are then used to methodically investigate the dynamics of matter-wave solitons in the network. In the context of Bose-Einstein condensates (BECs), the book analyzes the dynamical properties of NLS equations with the external potential of different types, which govern the dynamics of modulated matter-waves in BECs with either two-body interactions or both two- and three-body interatomic interactions. It also discusses the method of investigating both the well-posedness and the ill-posedness of the boundary problem for linear and nonlinear Schr dinger equations and presents new results. Using simple examples, it then illustrates the results on the boundary problems. For both nonlinear transmission networks and Bose-Einstein condensates, the results obtained are supplemented by numerical calculations and presented as figures.

Wu-Ming Liu obtained his Ph.D. degree from the Institute of Metal Research, Chinese Academy of Sciences, Shenyang, China in June 1994. He became an Associate Professor at the Institute of Theoretical Physics, Chinese Academy of Sciences, Beijing, China, in 1996, and has been a Full Professor at the Institute of Physics at the same Academy since 2002. He has served as an editorial board member for several international journals, including Scientific Reports, Journals of Physics: Communication, Frontiers of Physics, Journal of Atomic and Molecular Science, China Measurement and Test. His research interests include atomic and molecular physics and quantum optics theory, the theory of quantum information and quantum computation, and condensed matter theory Emmanuel Kengne obtained his Ph.D. degree in Physicomathematical Sciences from the Kharkiv State University (now Kharkiv National University), Ukraine in January 1994. He is an applied mathematician, and a Professor at the Department of Computer Science and Engineering, University of Quebec at Outaouais, Canada. Emmanuel Kengne has made major contributions to a vast number of fields, including the theory of well-posedness boundary value problems for partial differential equations, wave propagation on nonlinear transmission lines, optical and heat solitons, nonlinear dynamical lattices, Ginzburg--Landau equations, Boson--Fermion models, bio-thermal physics, light propagation, thermal therapy for tumors, as well as many other mathematical fields.