Raising Them Right: The Untold Story of America's Ultraconservative Youth Movement and Its Plot for Power (Compact Disc) 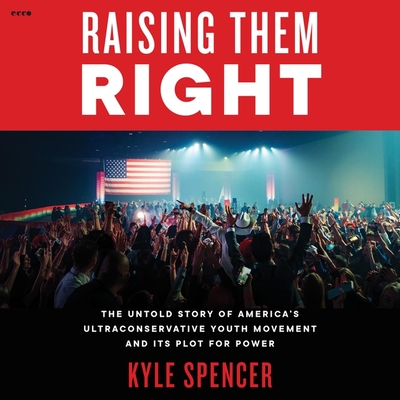 Raising Them Right: The Untold Story of America's Ultraconservative Youth Movement and Its Plot for Power (Compact Disc)

A riveting behind-the-scenes account of the new stars of the far right--and how they've partnered with billionaire donors, idealogues, and political insiders to build the most powerful youth movement the American right has ever seen

In the wake of the Obama presidency, a group of young charismatic conservatives catapulted onto the American political and cultural scenes, eager to thwart nationwide pushes for greater equity and inclusion. They dreamed of a cultural revolution--online and off--that would offer a forceful alternative to the progressive politics that were dominating American college campuses.

In Raising Them Right, a gripping, character-driven read and investigative tour de force, Kyle Spencer chronicles the people and organizations working to lure millions of unsuspecting young American voters into the far-right fold--revealing their highly successful efforts to harness social media in alarming ways and capitalize on the democratization of celebrity culture.

These power-hungry new faces may look and sound like antiestablishment renegades, but they are actually part of a tightly organized and heavily funded ultraconservative initiative to transform American youth culture and popularize fringe ideas. There is Charlie Kirk, the swashbuckling Trump insider and founder of the right-wing youth activist group Turning Point USA, who dreams of taking back the country's soul from weak-kneed liberals and becoming a national powerbroker in his own right. There is the acid-tongued Candace Owens, a Black ultraconservative talk-show host and Fox News regular who is seeking to bring Black America to the GOP and her own celebritydom into the national forefront. And there is the young, rough-and-tumble libertarian Cliff Maloney, who built the Koch-affiliated organization Young Americans for Liberty into a political force to be reckoned with, while solidifying his own power and pull inside conservative circles.

Chock-full of original reporting and unprecedented access, Raising Them Right is a striking prism through which to view the extraordinary shifts that have taken place in the American political sphere over the last decade. It establishes Kyle Spencer as the premier authority on a new generation of young conservative communicators who are merging politics and pop culture, social media and social lives, to bring cruel economic philosophies, skeletal government, and dangerous antidemocratic ideals into the mainstream. Theirs is a crusade that is just beginning.