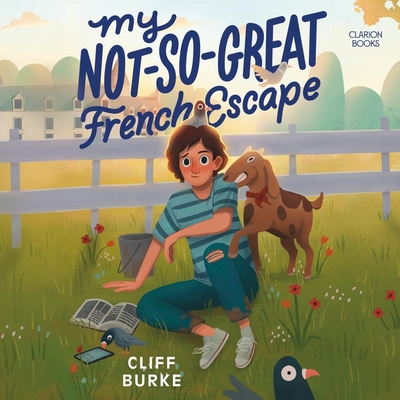 When Rylan's best friend ditches him for the cool kids, Rylan thinks a summer spent working on a French farm will be the perfect chance to reconnect. But he doesn't count on his long-lost father showing up. This funny, touching novel is perfect for fans of Gary D. Schmidt and John David Anderson.

Rylan O'Hare has been drifting apart from his best friend, Wilder, for months. Wilder's family became mega-rich when his mom invented an app that reminds people to drink water, and now he barely has time for Rylan. So when Wilder invites Rylan to join him at a summer farming program in France (all expenses paid), Rylan see it as a chance to repair the friendship. Not only that, but he'll get to learn French, milk goats, and eat lots (and lots) of cheese.

But before they take off, Rylan's mom drops a bomb: His dad (whom he hasn't spoken to since he was three) lives in France, too, and he wants to meet.

Between being swarmed by bees, pooped on by pigeons, and sprayed with goat milk, Rylan's great French escape isn't quite what he thought it would be. Even worse, Wilder ditches him for some cool French kids he meets along the way. And Rylan still can't decide whether or not he should actually meet his father.

But somewhere in all the chaos, Rylan begins to find his way, and he realizes that sometimes you have to release old expectations to discover new destinations.