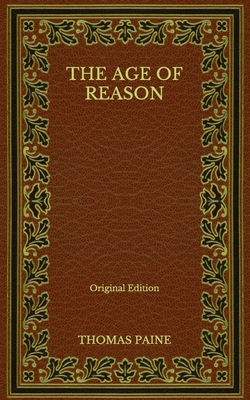 
Special Order—Subject to Availability
(This book cannot be returned.)
It has been my intention, for several years past, to publish my thoughts upon religion; I am well aware of the difficulties that attend the subject, and from that consideration, had reserved it to a more advanced period of life. I intended it to be the last offering I should make to my fellow-citizens of all nations, and that at a time when the purity of the motive that induced me to it could not admit of a question, even by those who might disapprove the work.The circumstance that has now taken place in France, of the total abolition of the whole national order of priesthood, and of everything appertaining to compulsive systems of religion, and compulsive articles of faith, has not only precipitated my intention, but rendered a work of this kind exceedingly necessary, lest, in the general wreck of superstition, of false systems of government, and false theology, we lose sight of morality, of humanity, and of the theology that is true.As several of my colleagues, and others of my fellow-citizens of France, have given me the example of making their voluntary and individual profession of faith, I also will make mine; and I do this with all that sincerity and frankness with which the mind of man communicates with itself.I believe in one God, and no more; and I hope for happiness beyond this life.I believe the equality of man, and I believe that religious duties consist in doing justice, loving mercy, and endeavoring to make our fellow-creatures happy.But, lest it should be supposed that I believe many other things in addition to these, I shall, in the progress of this work, declare the things I do not believe, and my reasons for not believing them.I do not believe in the creed professed by the Jewish church, by the Roman church, by the Greek church, by the Turkish church, by the Protestant church, nor by any church that I know of. My own mind is my own church.All national institutions of churches, whether Jewish, Christian, or Turkish, appear to me no other than human inventions set up to terrify and enslave mankind, and monopolize power and profit.I do not mean by this declaration to condemn those who believe otherwise; they have the same right to their belief as I have to mine. But it is necessary to the happiness of man, that he be mentally faithful to himself. Infidelity does not consist in believing, or in disbelieving; it consists in professing to believe what he does not believe.It is impossible to calculate the moral mischief, if I may so express it, that mental lying has produced in society. When a man has so far corrupted and prostituted the chastity of his mind, as to subscribe his professional belief to things he does not believe, he has prepared himself for the commission of every other crime. He takes up the trade of a priest for the sake of gain, and, in order to qualify himself for that trade, he begins with a perjury. Can we conceive anything more destructive to morality than this?Soon after I had published the pamphlet Common Sense, in America, I saw the exceeding probability that a revolution in the system of government would be followed by a revolution in the system of religion. The adulterous connection of church and state, wherever it had taken place, whether Jewish, Christian, or Turkish, had so effectually prohibited, by pains and penalties, every discussion upon established creeds, and upon first principles of religion, that until the system of government should be changed, those subjects could not be brought fairly and openly before the world; but that whenever this should be done, a revolution in the system of religion would follow.