Simón Bolívar: The Life and Legacy of the Venezuelan Leader Who Liberated Much of Latin America from the Spanish Empire (Paperback) 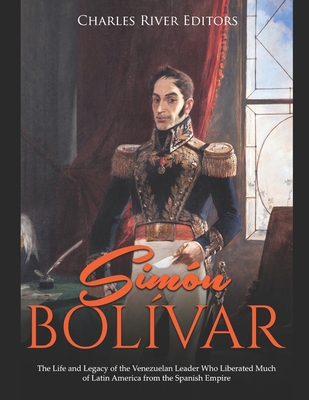 Simón Bolívar: The Life and Legacy of the Venezuelan Leader Who Liberated Much of Latin America from the Spanish Empire (Paperback)


Not On Our Shelves—Ships in 1-5 Days
(This book cannot be returned.)
*Includes pictures
*Includes excerpts of contemporary accounts
*Includes a bibliography for further reading
"When tyranny becomes law, rebellion is a right." - Sim n Bol var
Although he is unquestionably one of the most studied leaders of the 19th century, Sim n Bol var remains today as enigmatic as he was two centuries ago, when his vision and presence largely inspired the overthrow of the Spanish Empire in the New World. The legend of Sim n Bol var has a great deal to do with the Siddhartha-like transition of a Creole aristocrat into an impoverished revolutionary; a sparsely educated but pampered aesthete into a premier Enlightenment thinker, and a privileged youth into a warrior of almost mythological prowess. And while all of it, to a greater or lesser extent, is true, Sim n Bol var was also a revolutionary of an atypical variety. The transformational ideals of Sim n Bol var did not always conform to the uncompromising canons of the French Revolution, or the libertarianism and individual freedoms of the American, and nor was he instinctively hostile to the concept of monarchy or aristocracy. His identification with principles of Enlightenment was leavened by exception, and by consideration, and although his military skills have certainly been overstated, they have tended to be judged against the background of Spanish moral and material collapse in the New World.
In the end, it is precisely these paradoxes and contradictions that made and still makes Sim n Bol var such an interesting individual. The broad milieu into which he was born was a colonial regime spread across a vast region already many centuries old, well established and with many of the essential social and political structures of the Old World implemented in the New World. Sim n Bol var was an aristocrat, but he was also a "Creole," which implies that he was not of pure European stock, but of blood mixed over centuries with indigenous people, and sometimes with that of imported African slaves. While this did not inhibit the emergence of a wealthy, and at times extremely wealthy local landed aristocracy, the colonial Creole could never hope to be ranked equal to the appointed Spanish ruling class, and certainly not to the blue-blooded of metropolitan breeding, all of which created an inevitable tension in the relationship between overseas dependency and metropolitan government and society. But in the early 19th century, events transpiring back in Europe would make it possible for independence movements to spread across the New World, especially as the Spanish Empire teetered, and those events would make it possible for Bol var to become the most famous liberator in the region, forever immortalizing him across the world as El Libertador.
Sim n Bol var: The Life and Legacy of the Venezuelan Leader Who Liberated Much of Latin America from the Spanish Empire chronicles how El Libertador successfully freed massive parts of the New World from the grips of the Spanish. Along with pictures and a bibliography, you will learn about Bol var like never before.