Polish And Tapas Cookbook: 2 Books In 1: Over 150 Recipes For Preparing At Home Traditional Food From Poland And Spain (Paperback) 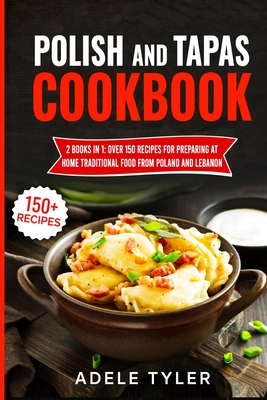 Polish And Tapas Cookbook: 2 Books In 1: Over 150 Recipes For Preparing At Home Traditional Food From Poland And Spain (Paperback)


Not On Our Shelves—Ships in 1-5 Days
(This book cannot be returned.)
Are you looking for a complete Polish And Spanish cookbook?In this 2 books in 1 by Adele Tyler you will learn how to prepare over 150 recipes with traditional dishes from Poland and Spain.

In the first book, Polish Cookbook, you will discover 77 recipes for traditional Polish food.

Located in between the Central Europe and the Nordic Countries, Poland is land rich of history that lived in depth every major turnaround in the European scene across the centuries.

As it happens for every country with such history - another notable example would be Italy - also the culinary landscape is rich of contamination and in many Polish dishes is clear the touch given by one cuisine or another.

The Polish cuisine is rich and high in calories, similar to Nordic Countries and Russia, given the extreme temperature that can be reached during winter. Summer, though, is warm enough in a perfect Central European style, allowing to add into the menu several fresh dishes, vegetables and cucumbers.

The most famous dish is surely Pierogi, the Polish dumplings well known worldwide, but from chicken soups to cabbage rolls, pancakes and delicious cookies, the traditional recipes from Poland will not disappoint you.

In Polish Cookbook by Adele Tyler Blanc you will learn:

If you want to explore a new way of cooking coming directly from Europe, this cookbook is for you.

In the second book, Tapas Cookbook, you will learn how to cook delicious recipes from Spanish tradition.

A tapa is a small Spanish dish that despite might look like an appetizer is more a different way of having a meal. Tapas are often combined creating a whole meal, especially over dinner and they are appreciated for the variety of the ingredients.

Tapas are indeed a joyful way to eat, trying different recipes, tastes and types of food during the same night and that's the reason why a lot of tapas bar opened all around the world. Originally, though, they came to life because Spaniard people usually have dinner server around 10pm, resulting in a long gap between the end of work-day and dinner time. Tapas were invented by bar and pubs, serving small food not enough to spoil the dinner but strong enough to support beer, wine or drinks.

Ingredients vary from fish and seafood to vegetables, to jamon - Spanish traditional ham - to anchovies and sardines. They can be easily prepared in your own kitchen because ingredients can be found at the local supermarket, while preparations tend to be quick.

In Tapas Cookbook by Adele Tyler you will learn:

If you want to try something different and impress family and friends, this cookbook is for you

Scroll up, click on buy it now and get your copy today.