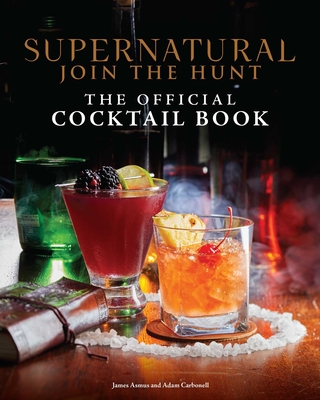 Inspired by the iconic heroes, monsters, and small-town locales of the beloved television series Supernatural, this collection of diabolically delicious cocktails takes readers on a road trip alongside Sam and Dean Winchester. Featuring a collection of hunter-approved libations, this official book includes seventy recipes for delicious, handcrafted cocktails and a curated selection of tasteful bar bites to pair with the beverages.

With drinks inspired by everyone from the Winchester Brothers and Castiel to Bobby Singer, Jack, Lucifer, and more, Supernatural: The Official Cocktail Book includes step-by-step instructions, tips on how to craft the perfect cocktail, and beautiful full-color photography. An essential addition to every hunter’s bar cart or bookshelf.
JAMES ASMUS is a writer of books, theater, comedy, video games, and TV. His published work includes over a dozen Marvel Comics titles including GAMBIT, CAPTAIN AMERICA, and AMAZING SPIDER-MAN, RICK & MORTY, the TRANSFORMERS / MY LITTLE PONY crossover for IDW, and a reimagining of QUANTUM and WOODY for Valiant (which snagged five Harvey Award nominations, including Best Writer). James has also written original series like the Manning Award-nominated apocalyptic buddy comedy END TIMES of BRAM & BEN, action satire SURVIVAL STREET, all-ages sci-fi dark comedy FIELD TRIPPING, plus body horror series EVOLUTION and THIEF OF THIEVES for Skybound (with Walking Dead creator Robert Kirkman). In TV, he’s written for Marvel Hero Project and Marvel Video Comics as well as written and produced shows for History and Discovery networks. James lives outside Portland, OR, with his wife and two weirdly wonderful kids.

James lives outside Portland, OR with his wife and two weirdly wonderful kids.

Adam Carbonell is a San Diego based mixologist and educator with over 20 years’ experience in the food and beverage industry, specifically the prestigious San Diego craft beer scene. As a professional brewer he strove to innovate the beer space by bridging the gap between kitchen and brewery with a reputation for working directly with local farmers, sourcing and processing fresh ingredients by hand.  During his years of working with some of the world’s most prestigious breweries and overseeing every aspect of the brewing process, from production to distribution and marketing, he transitioned to the non-profit sector, taking the role of San Diego Brewers Guild President helping to promote and grow the San Diego craft beer market, co-founding San Diego Beer Week in the process.

After years working as a brewery contractor and consultant he gradually found his way to the front of the house in the infancy of San Diego’s cocktail boom, and he’s still there. Adam enjoys getting to connect daily with guests on a personal level over handcrafted libations but also as an educator and lecturer he gets to spread the good word of distilled spirits and cocktails to a worldwide audience.