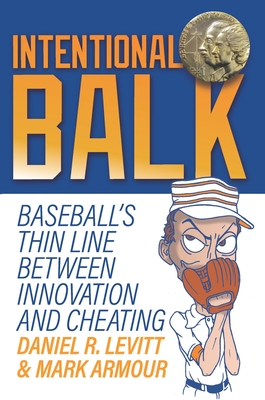 From the moment of its inception, the quintessentially American sport of baseball has included cheating. Sometimes that rule-skirting is embraced as ingenious hijinks; other times, reviled as an unforgivable trespass. But what exactly is the difference? Why is skipping bases less egregious than signing underage players? Is sign-stealing evidence of ingenuity, or does it fundamentally change the nature of the game?

In Intentional Balk, nationally-recognized baseball historians Dan Levitt and Mark Armour examine cheating in baseball as the pursuit of a competitive edge that in other endeavors might be heralded as innovation. Wherever you come down on the question, Intentional Balk offers an engrossing chronicle of America's pastime and the players, coaches, groundskeepers and management who for more than 150 years have sought any advantage to win at all costs.

Daniel R. Levitt is the author of several award-winning baseball books and numerous essays. His previous books include Paths to Glory; Ed Barrow: The Bulldog Who Built the Yankees' First Dynasty; The Battle that Forged Modern Baseball: The Federal League Challenge and Its Legacy; and In Pursuit of Pennants. Dan currently serves as treasurer of the Society for American Baseball Research (SABR) and is the co-chair of SABR's Business of Baseball committee. More on Dan can be found at http: //daniel-levitt.com/ Mark Armour is an award-winning writer living in Corvallis, Oregon. He is the author or co-author of several previous books on baseball, including Paths to Glory; Joe Cronin: A Life in Baseball; Pitching, Defense and Three-Run Homers; The Great Eight; and In Pursuit of Pennants. For SABR, he founded the Baseball Biography Project and the Baseball Cards Committee, and currently serves as the President of the Board of Directors. More on Mark can be found at www.mark-armour.net/