Wherever You Are Tonight: Love and War in the Forgotten Theater of World War II (Hardcover) 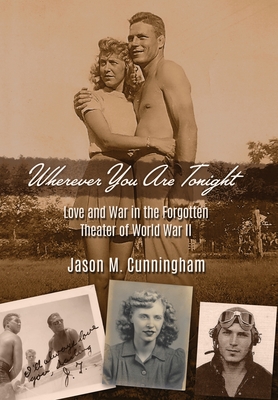 Wherever You Are Tonight: Love and War in the Forgotten Theater of World War II (Hardcover)

This memoir brings to life the World War II service of the author's grandfather, J.T. Cunningham, as a pilot in the China-Burma-India Theater (The Forgotten Theater). Based on nearly a thousand letters between J.T. and his wife, Katie, it not only documents in very personal terms one man's life and experiences in an iconic era, but also illuminates the war's impact on a young couple as they nurture their relationship amid their separation in a world of international upheaval.

"Wherever You Are Tonight is a story for the ages. It is a love story, a war story, and a compelling account of a young American Army Air Corp pilot during World War Two, James Tully (JT) Cunningham, in the China- Burma-India War Theater, known as the Hump. Wherever You Are Tonight is a poignant portrayal of passion, patriotism, bravery, and devotion told by JT's grandson, Jason Cunningham. It is meticulously researched, unpretentious account of an American pilot flying in a dangerous and threatening environment and yet his devotion to the love of his life, his wife Katie is on every page, through every letter and every word a story of passion and dedication. The vivid prose is punctuated by readable letters, pictures, and official documents, in a can't-put-it-down fashion. Wherever You Are Tonight is book you will find irresistibly captivating." - Ronald W. Vardy Ph. D., University of Houston; Former Army Officer, Infantry, Vietnam, Retired College Professor Emeritus; Adjunct Professor, University of Houston, National Security Studies

"Jason Cunningham hits the mark with his choice of epistolary narrative to convey a rich account of love, war, and the often-forgotten theater of WWII. Before Iwo Jima there was the Hump. Cunningham lets J.T. and Katie speak for themselves to share their hopes, fears and optimism, while providing precise contextual narrative to guide the reader through this tragic, yet rich love story." - Matthew L. Partridge, Far East Cryptologic Linguist Specialist, United States Air Force,1990-1994; Former Director of ESL & Adjunct Professor, Stephen F. Austin University, English Department